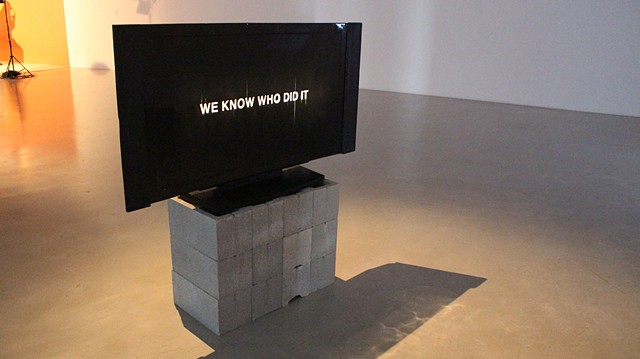 We Know Who Did It 2014 carved and charred jelutong, resin, tinted epoxy

In early 2013 the administration building and several classrooms were destroyed in an act of arson at Eagle Vale High School. The $1 million worth of damage was taken in stride by the students, adapting to new timetables around the carnage until the school was rebuilt and life moved on. Earlier this year my brother and I undertook a series of workshops with a group of teenage boys at the school, looking at ideas of group identity, resilience and the rites of passage in entering adulthood. Discussing the fire with the group I was struck by the simplicity of the response ‘we know who did it’, a straight ownership of the situation that defined them in natural opposition to the authorities of the school, the police and the media. This was the real story, accepting the attack as a symptom of defiance and sealing any incrimination in tacit solidarity. The fire has since become old news, giving way to recess, girls and rugby finals, the players change but the same teams will keep running out every year.