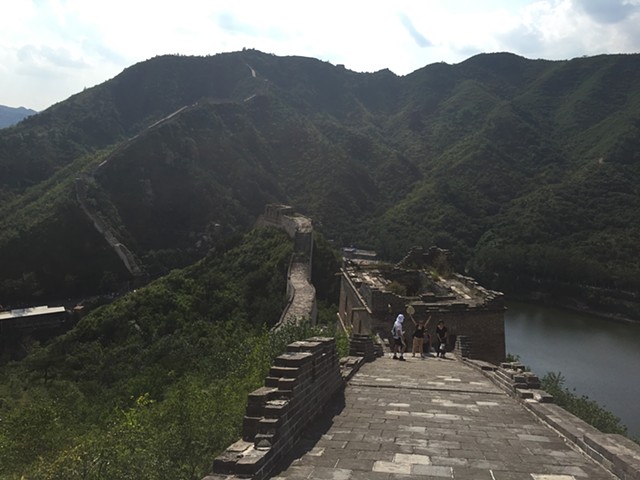 What a day. I got up around 630am and phaffed around for a bit before heading out for a run and some exercise in the square over the road. When I got back we had breakfast and made our plans for the day. I managed to watch the GGG vs Kel Brooks fight, damn Golovkin is an amazingly clinical fighter. Before lunch we all went up to the gym for another spot of exercise before sitting down to another huge, mostly vegetarian feast. Justin, Veronica, Hamida and I loaded into the car and picked up Eugenia and little Eda for a trip to the great wall. On the way Eda shared her macadamia’s, cruskets and rice crackers with everyone, she is such a cute little button and makes me very clucky. We drove through some amazing scenery before the wall appeared in the mountains ahead. It was a beautiful clear day and we could see the wall snaking across the mountain tops into the distance. We made our way across a dam and climbed the stairs to the wall. Apparently this was the local access to the wall and only cost 5 yuan as opposed to 80 at the tourist end. Veronica is an excellent fixer of all things. To get up to the wall we had to climb a somewhat rickety ladder and were met with another very steep set of stairs leading up to the next little fortress. We had to leave Eda and Eugenia at the first fortress, in many places the walls were only ankle high with a 5-6 metre drop and little Eda likes to make her dashes for freedom. We laboured our way up the steps which turned into smooth paving at some points, making the ascent a little harder each time. We reached the next little fortress and took in the sweeping views of the wall, mountains and valleys in between. There was an extremely rickety ladder in there leading to the top of the ramparts which Justin and Eugenia braved, I was a little sceptical about my weight on those twigs and chose to stay on safe ground. After making our way back down the stairs, ladder and rocky steps, we dropped Eugenia and Eda back to their place and headed back to Shen’s to get ourselves ready for our first Chinese spa. The spa at Huairou was something entirely new for me. We arrived at the desk of this enormous building fronted in bouquets of flowers in quilted silver urns and LED lights. We replaced our shoes with thongs and were given a little bracelet each to wear. The women headed off to the ladies side and Justin and I followed Shen down a set of clear acrylic stairs with green LED’s over a fish pond with mirrors everywhere. We were greeted by a bunch of very young guys who led us to our lockers, we were pretty much doing whatever Shen was doing. I was super nervous about getting my kit off but that was it, we were down to thongs and a bracelet and then I was nude in a giant hot bath with a bunch of dudes – kids, old men, young men, everyone. We bubbled ourselves in the spa for a while before hitting the sauna, another shower and a full body scrub, front and back. We showered again and brushed our teeth before putting on paper undies and matching pyjamas. We headed upstairs for an enormous buffet with steaming hotpots and endless supplies of veges and super thin sliced beef and lamb. We stuffed ourselves and headed back downstairs for a massage. The massage room was filled with about fifty reclining couch bed things, each with their own TV, doona and pillows. The passages were really ornate with velvet curtains, lacquered everything with red and gold fanciness. We had an intense foot massage, this was it’s own ordeal because I’m really, really ticklish but I survived even the cupping on the soles of my feet and little hammers up and down my legs. We also had high pressure head massages and they bent, cracked and battered our arms and legs. Everyone passed out afterwards and there was some debate as to whether or not we should stay the night. It was not a super relaxing process but we felt completely reborn afterwards, my feet were smooth as marble and I couldn’t seem to lift them as I waddled away. We all got our pants back and headed back to Shen’s. I skyped Anna for an hour, it was lovely to see her face in our little lounge room at home. Then I sacked out and slept like a log.