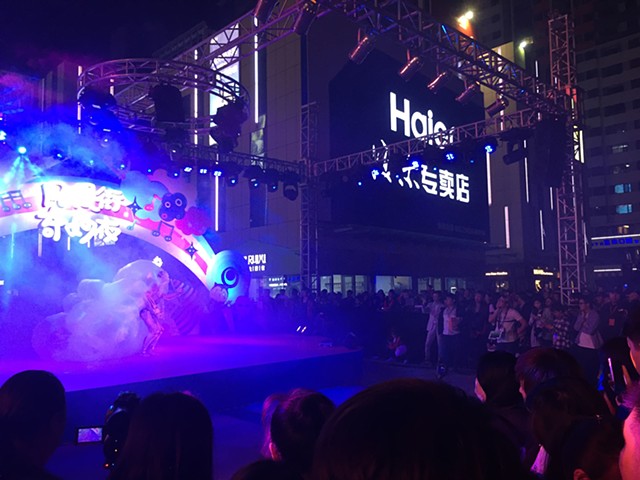 My eyes sprang open at 630am and I made myself an extremely crap instant coffee before going in search of the gym. I found it down in the basement level past the bowling alley, snooker room, mahjong room, beutician and hairdresser. Nobody was about much and the gym was decent size. I made a very half assed attempt at feeling better about myself after eating so much all the time and went back upstairs to meet Justin for breakfast. I’m loving these buffets and kinda got used to 3 course breakfasts, I’m going to miss this star treatment. We hung out at the hotel for a couple more hours, I submitted my grant so I’m very happy. The car came at 1200 and we met Fong, another performer who has a tap show. We all headed off for another lunch in another private room with Vivian and a few of the organisers. The entire area was branded with the company name, literally thousands of apartments in groups of 10-20 50 storey buildings as far as the eye can see. Apparently they have developments like this all across China. After lunch we headed to the stage for rehearsals which meant waiting for ages for events people to do what they do before Justin got a chance to do a run through without his costume. We had a couple of hours to kill so we went back to the hotel, I took some photos around the place trying to capture the full dystopian sci fi feel of the city in an iPhone and then had a bath and chatted to Anna. We headed back to the stage at 530pm and waited around making until Justin had to go get dressed. The event was a crazy mix – starting with a kids dance crew, male dance troupe, tap dancing, Carrion in full swing followed by Samba dancers, a band in cow costumes and K-pop style ladies. There was a drone buzzing through, giant screens, inflatable Angry Birds and loads of very grim looking security guards everywhere for the crowd of kids, families and old folk. Everyone seemd to be having a great time but they were a bit freaked out by Carrion! We hung around afterwards and Justin did a bit of an interview on stage and kids had their photo’s with him. It was a pretty surreal experience all round and I’m glad I was there to witness Carrions most bizarre appearance yet I think. After that we jumped in the car again and headed off for dinner at a Korean BBQ place up the road. Dinner was a feast, we ate so much fresh cooked meaty things, noodles, seafood, rice, eggy stuff, tofu and a litre of beer. We were so stuffed and decided to head back to the hotel rather than go out partying with everyone else. Apparently the spa’s are legendary in Shenyang but we didn’t get a chance to go, I needed to lie down on the king size bed and moan about how full I was while planning my assault on the breakfast buffet, what have I become? My eyes zipped up before midnight and I was gone.