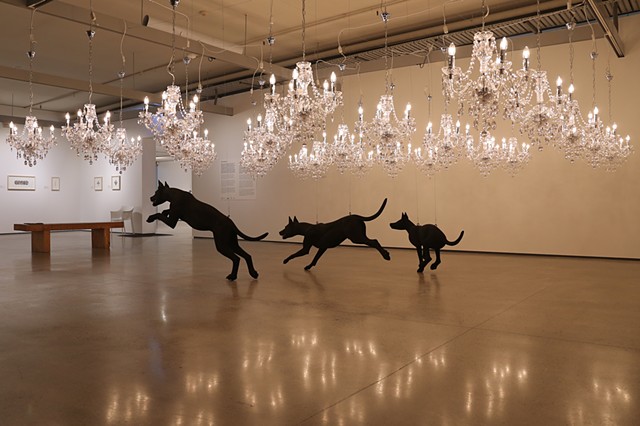 The Dogs | Abdul-Rahman Abdullah
next >

The Dogs emerges from vivid childhood recollections of being chased by dogs. The area that I grew up in, back in the eighties and early nineties was full of hockshops, knockshops, mechanics and dodgy car yards, which meant a lot of barbed wire fences and angry dogs. I was terrified of dogs, they represented hard boundaries that I wasn’t prepared to tackle as a child. Dogs are a ubiquitous part of the urban landscape in Australia and every yard seemed to be patrolled by something grunting behind the fence. There was the fear of dogs as unpredictable and territorial but there was another level of fear that prickled my skin. Traditionally, dogs are considered unclean animals to Muslims, and unless they are kept to perform the tasks of protection and hunting they’re not considered as suitable companions. As a kid, these guard dogs fell easily into those antiquated roles, only I was the transgressor, the hunted. Worse still, there is a superstition among Muslims that black dogs are considered the representatives of Shaytan, the embodiment of evil. For a culture without imagery, we had no baby Jesus or Santa Claus, representing pure evil with an animal chasing you down an alley can be unnerving for a kid. The agency of culture casts a long shadow over what could be seen as a benign aspect of daily life. Ingrained fear focused the territorial aggression of these guard dogs as something far greater, it was as if they could smell my soul.

While the work is rooted in these childhood memories, the use of dogs to control people and protect the rights of a ruling class has a deep-rooted history. Exploiting the predatory instincts of dogs in the service of a very human agenda, they are synonymous with closed borders and the violent exclusion or containment of entire groups of human beings. I wanted this work to juxtapose the idea of territorial exclusion within a glittering, aspirational space described by the chandeliers. It promises an ideal that can’t be accessed from the outside, a gaudy beauty that belies the underlying violence of exclusion. I wanted this work to be a personal recollection that embodies a broader sense of how Australia conducts itself in the region. Incarcerating asylum seekers in horrific conditions in particular, is even more grotesque given the wealth and privilege our stolen country boasts. Detaining innocent people on Manus and Nauru at a cost of over half a million dollars per person, per year for up to eight years for example. Even now, the government has held 65 remaining refugees for almost two years in the Mantra Hotel, in Preston, Melbourne. Imagine the horror of being imprisoned with full views of the world’s most liveable city, this level of cruelty is a better representation of evil than any angry dog. Abdul-Rahman Abdullah | 2017