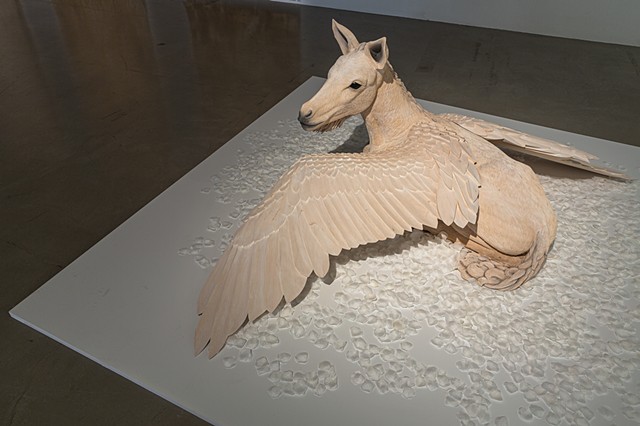 Buraq is an enigmatic figure of Islamic lore. The name is said to derive from the Arabic word for lightning, something that is vividly real yet fleeting and immaterial. Alluded to in the Quran and expanded upon in Hadith sources, Buraq is best characterised as the beautiful, winged horse-like creature that transported the Prophet Muhammad (PBUH) in a single night from Mecca to Jerusalem and ascending to the heavens beyond, described in the Surah Al-Isra (The Night Journey). Regarded as both a physical and spiritual journey, The Night Journey represents a defining point for Muslims when belief encounters the unbelievable.

The implications of such a creature and the journey undertaken have been elaborated upon over the last 1400 years. Buraq has been depicted in many different ways, most often with a human head and a variety of hybrid features such as a Peacocks tail, Leopard spots, brightly feathered, richly crowned, engulfed in flames, ornately jewelled, bridled or patterned. Described in poetry, painting and sculpture throughout the Muslim world from Persia to the Philippines, Buraq embodies the complex space between doctrine and mythology, where truth is a spectrum of possibilities.

For the children of migrants there is often a mythologised journey at the core of their outlook; family histories of parents or grandparents undertaking a fraught passage that shaped the circumstances of today. From the arrival of my mother in Australia, to the migratory networks of my ancestors between the Malay peninsula and the islands of Sulawesi, Borneo and Sumatra to distant origins in Taiwan, journeys have been made. When people are required to commit themselves to a seemingly impossible journey, a divine precedence may offer the necessary wings.