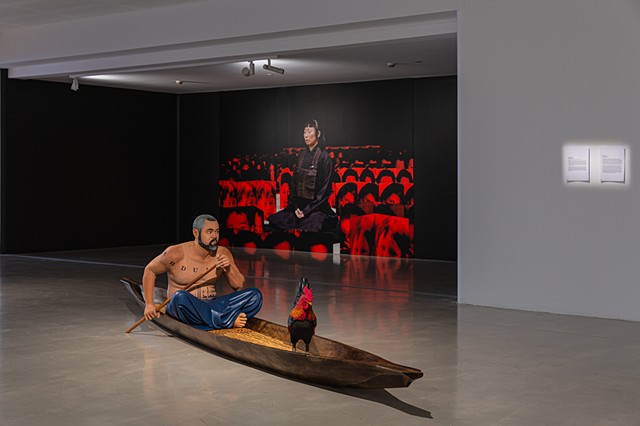 This work was originally commissioned for Magic Object: Adelaide Biennial 2016. The work was developed in response to a research trip I undertook to the island of South Sulawesi and Malaysia to explore my ancestral links to these areas through my Bugis heritage. I was particularly interested in linking my Malay family history back to South Sulawesi, the island where my ancestors left from over 300 years ago to create a new lineage in the Malay peninsula. My research enabled me to trace back eighteen generations of my family back Luwu, one of the earliest Bugis kingdoms in South Sulawesi. The work is titled Merantau, it means to live overseas, seek adventure or seek your fortune. I wanted to place myself within the idea of Merantau, the drive to create something new, somewhere new. I wanted to fold myself into a story that could take place any time in the past few hundred years on a very human, individual scale if that makes sense. The canoe is directly referenced from a meranti dugout that I found in Astana Raja, a town next to my mothers home village of Kampung Linggi in Negeri Sembilan, Malaysia. The canoe itself is an Orang Asli design, the indigenous people of the Malay peninsula who provided most of the original small river craft that were essential for travelling through the dense forests of Malaysia. The rooster is an Ayam Ketawa (Laughing Chicken), a prized breed originating in South Sulawesi. The stories of my ancestors always focus on the most illustrious, the noble lineages, the conflicts and politics that defined the creation of new communities in the Malay peninsula emerging from the Bugis migrations from South Sulawesi. Within those histories are countless decisions made by individual people, accreted over the centuries as an integral chapter of South East Asian history. I wanted to focus on the idea of seeking something new, taking a singular point of view in a larger story of trepidatious exploration, the vulnerability of a person staking a claim in disputed territory. The rooster has always been emblematic of bravery and pride in South Sulawesi and Malaysia, I wanted to suggest those elements at the same time as suggesting that this person is here to put down roots. In this sense the rooster becomes a signifier of wilful domestication, a desire to establish a new home and a new lineage. For me, my ancestral past has been defined by this desire, a common desire that has driven the migration of people around the world for thousands of years, there is a simplicity in that urge to create something new that shapes the idea of home as something far greater than geography.