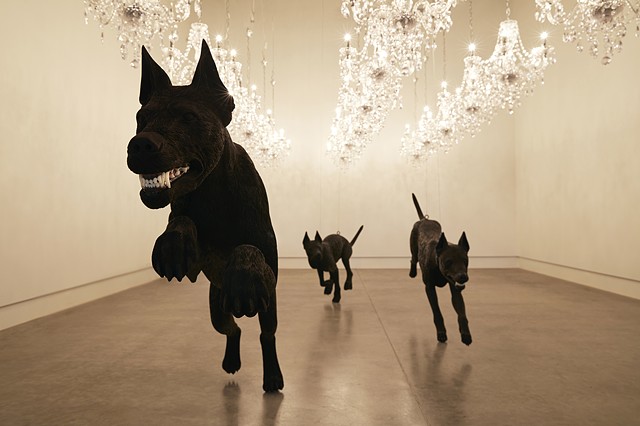 The Dogs
< previous next >

The Dogs spills from childhood memories of being chased by dogs. The area that I grew up in was full of pawnshops, cheap car yards and requisite guard dogs. I had a phobic relationship with dogs, they represented an animal violence that sparked panic. Traditionally, dogs are considered unclean animals to Muslims, unless they are kept for protection and hunting they’re not considered as familial companions. For me, that was the role they played, only I was cast in the role of the transgressor, the hunted. On a further superstitious level, black dogs have been considered as representatives of Satan, the embodiment of evil. The agency of culture can cast a long shadow over an otherwise benign aspect of daily life. Ingrained fear focused the protective nature of these guard dogs as something far greater than territorial, it was as if they could smell my soul.

While the work is rooted in vivid recollections of childhood, the use of dogs to control people has a long history in colonial and counter revolutionary oppression. Exploiting the predatory instincts of dogs in the service of a human agenda, they have become synonymous with closed borders, crowd control and intimidation. This work juxtaposes the idea of territorial exclusion within a glittering, aspirational space described by the chandeliers. It promises an ideal that can’t be accessed, a gaudy beauty that belies the underlying violence of borders. While Australia isn’t counted among the 50 countries currently sharing in 27000km of walled borders, we have weaponised our geography for political gain, excluding the most vulnerable people fleeing violence to appease the belligerence of a voting public.