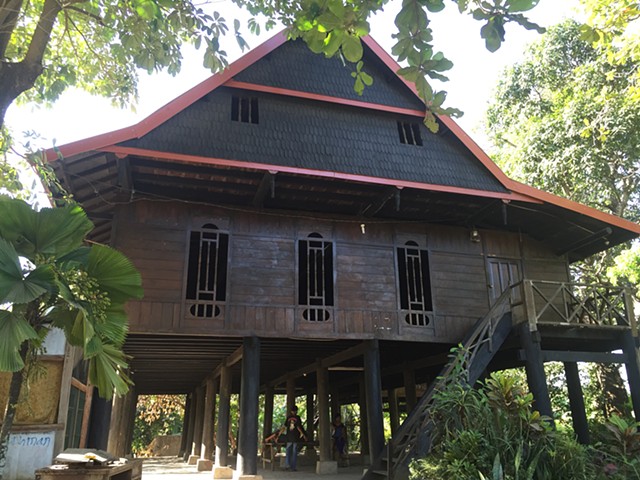 The breakfast room was crowded again with brightly coloured ladies in scarves, men shuffling around fat kids in pyjamas. We went out to look at the Kota Makassar Museum which turned out to be shut again, dad wanted to have a look at a little green mosque up against the walls of Fort Rotterdam that we could see from the hotel. At one point we had to stop while a procession of up to 50 cars came streaming out of the church complex near the hotel. Police had blocked off the road to allow them through and traffic was backed up for a few blocks. The rule seems to be stop when the cops are looking and take your chances whenever you think you can get away with it. We just enjoyed the chaos. We’ve been hunting for a pair of nail clippers (alat potong kuku), it took four or five shops before we eventually found some at Makassar Mall in a beautician. We were looking for a big shopping centre following google maps when we found ourselves wandering through the tiny, winding laneways of a market selling everything from clothes, fabric, food, meat, basically everything. The walkways, no more than a metre wide in places had a drain filled with rubbish running through the middle. None of this stopped old ladies on scooters nosing through the pedestrians, bikes, cats and kids. Again we got a lot of smiles and waves and the men would call out assalamualaikum. The shopping centre turned out to be a construction site surrounded by this rambling maze. In the middle was a Hadji Kalla Toyota outlet, this was a fitting nod to dad’s last visit to Makassar when the option to be part of the business had come up. Yusuf Kalla entered his second term as the vice president of Indosnesia with Joko Jokowi at the end of last year, he’s certainly Orang Besar around here. Dad bought another topi and I bought a fan, I was cooking in there and had sweated my t-shirt down to the navel. We took a little refuge in Makassar Mall for the air con and drank a teh tarik taking in a breeze up on the top floor. We’ve come back to the hotel for our usual decadent buffet lunch before heading out this afternoon with Anggi, one of Indra’s students who will help us book a bus to Rantepao and show us some sights.

Anggi picked us up right on 2.30pm, she is one of Indra’s best friends and knows nearly every artist in Makassar. She runs a small art supplies store and teaches kids painting classes every Friday at Rumata art centre. We went to the Litha Bus Company offices first to book tickets to Rantepao on Thursday after a bit of confusion about travelling during the day rather than overnight. After that she drove us through the hectic traffic down to Opu Somba, a South Sulawesi themed park built in the remains of a Dutch castle about 10 km away from the city centre. We passed over a bridge onto an island in the middle of a small lake, the waterfront was filled with little corrugated iron huts where people were cultivating water plants and grass for sale. Opu Somba is a kind of park where 24 different structures are built to represent the distinct architecture from different parts of the island. The houses are built exactly as they’ve existed including Toraja Tongkanan and the classic Bugis stilt homes. It’s surprising to see how big these houses really are, and the time and effort that goes into the wooden structures. It’s hard not to be excited at seeing my first buffalo head sculptures on the Toraja facades and to peer through the slats into the gloomy interiors. Many of the houses were occupied by families who acted as caretakers for the area. There was washing out to dry and shoes at the door of some while others were clearly empty. It’s a bit of a hangout for local kids hanging around chatting or riding about four to a scooter. They were very curious about the three of us and would always return a chorus ‘walaikum salam’ to my greeting. At one point we walked through the last remaining gate of the old Dutch castle and a couple of young guys followed us in, one of them was the roughest looking man I’d seen here with a curious tattoo down his chin. They were both really short but it pays to be wary except that they only wanted a photo with us. I love these houses, there’s a real sense of grandeur as you climb the steps up to the ornate little verandahs, I kept expecting little eyes to be peering back at me from the darkness within. I was sweating buckets in the sun so we headed back into town to drink Sarabba, the classic Makassan drink. Sarabba is drank hot, full of ginger, pepper, sago jelly, peanuts and an egg which sounds odd but pulls together as a pretty good beverage. It’s kind of sweet and savoury at the same time and would be much better if the weather was colder, which it never is here. Anggi was an awesome host, apologising for her English which was pretty good, especially when my bahasa stretches to about 10 words. We got back to the hotel and flopped around for a bit before deciding to get room service. So far we’ve eaten every meal at the hotel, dad’s a bit wary considering he spent so much time being super sick when he was here last and I don’t mind because the food’s great. We’ll get more adventurous tomorrow, maybe find some seafood.