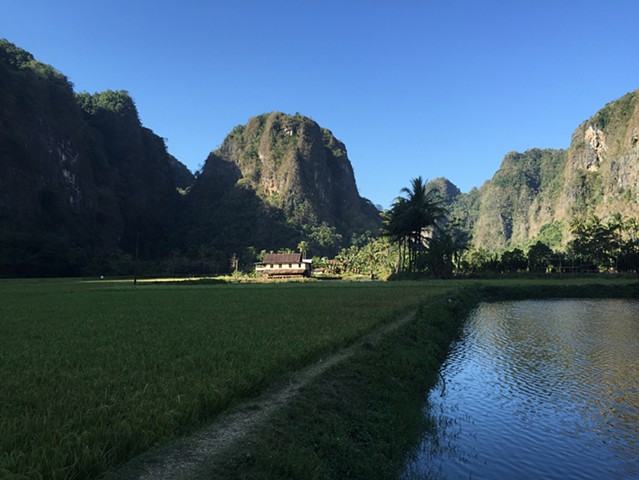 This morning we made our final attempt to visit Kota Makassar Museum, it’s a five minute walk from here and this time at least the gates were open. The museum was clearly shut so we had a peak through the windows to find big empty rooms, it’s a huge Dutch colonial building with nothing inside so we gave up. Anggi emailed me with a couple of suggestions including a place called Rammang Rammang Maros, a secluded little village outside of Makassar. I checked out some images online and we decided to head out that way. Anggi arrived dead on time and we headed north out of the city past the old port via the toll road and out through Maros. The road was choked with traffic now that the holiday is over and we rarely managed more than 30kmh in any one stretch. We drove for an hour past increasingly rural surrounds, tiny little roadside stalls selling cigarettes, kites, bananas and drinks. There are brightly tiled Masjids every few hundred metres, with minarets in chrome or patchwork tiles. Between the houses occupying every bit of space the rice paddies stretched off to the hills, people were harvesting, threshing and drying rice spread on tarpaulins practically on the road. Many of the stilt houses were perched amongst stagnant ponds of water with piles of refuse everywhere. The newer houses are all built above rows of shop fronts, mostly gated in checker plate or opening into every kind of shop, mechanic, grave stone dealer, goats, mini marts or the usual cigarettes and iced tea. We ended up driving well past the turn off and I thought I’d come to the rescue with google maps. Myydirections led us out on another goose chase before Anggi decided she needed some local knowledge and stopped for directions. Apparently we were meant to be looking for the big sign which turned out to be the big sign post without a sign and just off the main road we were there. We climbed down some steep concrete steps to a little jetty where a bunch of men and boys were playing cards and stepped into a little brightly coloured boat, enough for us three and the driver. Firing up the stinky two stroke motor we weaved out way through a series of limestone boulders and down a narrow river through the mangroves and palms that grew to the waters edge. The water itself was a dark grey brown, reasonably free of rubbish but filled with rotting bits of palm trunk and bamboo. It was cool on the water and we found ourselves cruising past bamboo huts and tall palms on the muddy banks with spindly bamboo bridges overhead. We passed tall limestone outcrops with gaping caves high up the cliff faces before passing through a natural tunnel in the rock about a metre wide to the village itself. There were more tourist in there, all of which looked like they came from other parts of Indonesia, we were the only proper foreigners. The village was completely protected by the steep limestone cliffs and hills surrounding it and was only accessible via the small river through the rocks. There were maybe 7 or 8 stilt houses perched among the rice paddies and we wandered through for a while, snapping pictures and taking in the scenery. They didn’t seem to mind visitors and probably got a little income out of the boat traffic. The village was so serene and it wasn’t hard to be transported back in time when this was what life was like in Sulawesi. We wound our way back up the river to the little jetty and jumped back in the car for the trip home. Peak hour down the single lane highway was another hectic mess of scooters, trucks, buses and cars all honking away and edging past each other by a whisker. Anggi was a total trooper throughout and dropped us back at the hotel in one piece. We ate some seafood down in the hotel restaurant (again) and headed upstairs to hang out. It’s great chatting to dad about all sorts of things, particularly about growing up in a tiny fledgling Muslim community in Perth. This is the most Muslim place I’ve ever been to, most of the women wear colourful scarves and a lot of men where topi’s and songko out of habit. It’s just a part of the landscape here