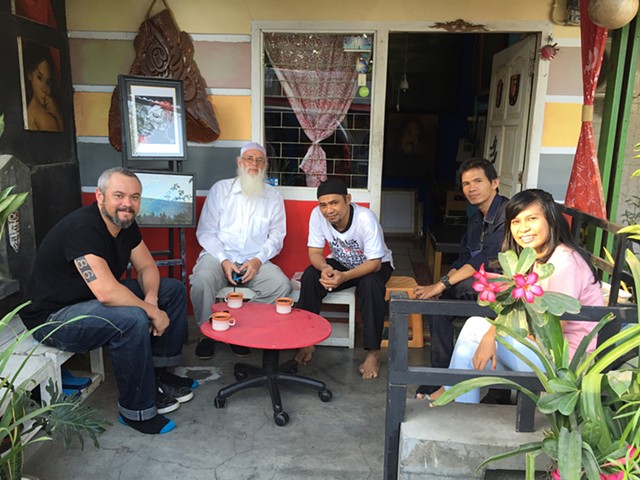 We got off to a later start today, Anggi came to pick us up at 2pm and we headed off to Rumata Artspace to meet Abi, the man who is organising the first Makassar Biennale later this year. We checked the space out and met a whole bunch of people involved in the space. Abi spoke English enough to explain some of the ideas around the biennale, looking at artists within the Bugis diaspora and using spaces like Rumata, Fort Rotterdam and the Liang Liang caves. My brother and I will send works for October and they were very happy that our participation meant that the project could now be considered international. We left with Anggi and Irfan, a design lecturer to visit a painter in the outer suburbs (name escapes me), he had a little gallery set up on the street and taught painting. He was such a smiley man, he didn’t speak English but dad was in full PR mode explaining my work and his story and how we came to be in Makassar. We drank super sweet black coffee and ate biscuits. We then drove out further to visit Budi, another painter who lived on the outskirts of Makassar. Driving through the suburbs was really entertaining in itself, it’s such a contrast in the way people live. We passed tin shacks built up against pillared mansions, pisang goreng stalls, army barracks and school kids with cardboard backpacks, gleaming 4WD’s and rusty rickshaws. That night we went to dinner at a Javanese restaurant near the hotel, it was a battle to pay but I put myself in the way of Irfan and managed to get my money down. These guys are super hospitable but I’m going to pay for something.