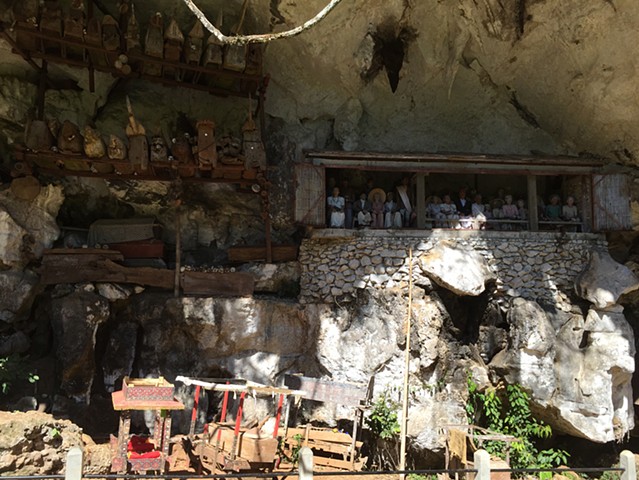 I slept like a log in the same bed as dad, lucky it’s king size and the air con is just right. We woke up and had a pretty straightforward breakfast of white toast, omelet and coffee. We went for a bit of a stroll up and down the main street and were back at the homestay by 9.30. Andi and Halmia appeared at 10.30, it was great to finally meet them. We were going to the mosque for Juma’a at midday so we had about 90 minutes to kill chatting and getting to know them. This is where dad is in his element, Halmia spoke English but Andi didn’t and dad carried the conversation no worries at all. Halmia is an Islamic history teacher and comes as across as very serious but she warmed to us quickly. We headed to the Mosque for Juma’ which brought back some memories for me lining up with the other dad’s and sons in tow. Afterwards we had lunch at a little halal restaurant, the menu’s are pretty much identical and it was ayam goreng for me again, this time we had tamarillo juice as well which was delicious. After lunch we headed up a really bumpy old road to Buntu Londa, a cave burial site just outside of Rantepao. The site is a bizarre mix of really old wooden boat coffins lodged high up the cliff face with many more recent Christian coffins stacked haphazardly into lower nooks and crannies. There were skulls everywhere and offerings of coke cans, cigarettes and bottled water. Inside the cave were more coffins, some of which were as recent as 2010. The site belonged to a single family and was still in use despite the tourist traffic. After that we drove up to Keta Kesu, a Torajan village with a very famous and well photographed row of Tongkonan houses and granaries opposite. The houses were heavily adorned with rows of buffalo horns and carved facades. We were able to go up inside one of them and investigate the tiny interior. The thickness of bamboo in the roof creates a really well insulated and cool interior complete with an open fireplace and squatty potty right in the middle of the room. At the entrance there was a fully albino buffalo with it’s nose ring being tied up painfully in order to give it bigger, more attractive neck muscles. It seemed unnecessarily cruel but nothing unusual in the way humans treat animals all over the world. Behind the village was another series of tombs, they were a strange variety of concrete Tongkanon, ornate houses and bunkers with portraits and Tau Tau figures of the interred people. Up the cliff face concrete stairs passed by another series of broken wooden boat coffins overflowing with human bones and skulls. There was a locked cage filled with more tau tau figures and the usual offerings of cigarettes and drinks. It was a little uncomfortable that we could walk amongst the coffins, people were digging through the bones and posing for photos with skulls in their hands. These coffins were the older kind of carved wooden boats, worn and cracked with age and the bones looked as though they’d been jumbled up many times over. The buffalos are bred purely to be bought and sacrificed in the funeral rituals up here, normal breeds cost around $3k - $4k, while the fanciest breed which is the black and white spotted buffalo, half albino and half black come in at $40k. A Toraja funeral would cost a couple of hundred thousand Australian dollars quite easily. No wonder they save for years in order to send their ancestors off in style. After that Andi dropped us off at the homestay and we drank thick black Toraja coffee with Jakob, our friendly host. We were joined by Johnny, a local guide and Flores, a Dutch girl who he’d just taken out for a days trekking. We chatted for a bit, dad dropped some homespun wisdom and charmed everyone with his travel stories. It turns out that mixed people like me are called gado gado, all mixed up. Dad and I went out for some dinner and were accosted by a very cute bunch of curious kids aged about 6-10. ‘Hey mister, orang Islami?’, they were little Muslims and clapped and cheered everything we said. We told them we were from Australia and they pointed out that I had a hidung Indonesia, an Indonesian nose, dad explained that my mum is Melayu and they clapped and cheered again. They wanted to hear a song so we all said Fatiha together. We ate Ikan Goreng and Ikan Bakar and headed back to the homestay. Johnny came back announcing he had a broken heart, he’d fallen in love with Flores but it was an impossible dream. He’s a handsome guy but that’s life in Rantepao, people come and go.