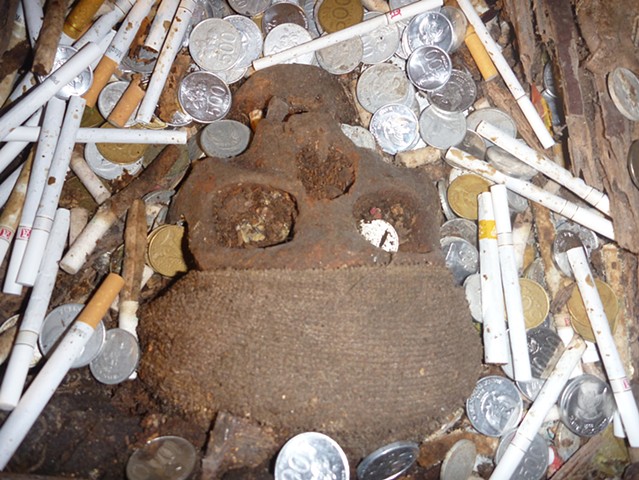 I had a bit of a fitful night sleeping, I had some crazy dreams about getting fish hooks stuck in my hands, I think it’s because I didn’t get to speak to Anna before I went to sleep. I need to hear her voice each day. After breakfast we went for a stroll over the bridge around the corner from the homestay. We were back by 9.30 and Halmia and Andi came to pick us up just after 10. Last night dad was reading his journal and we decided to visit some of the places that he’d wandered through all those years ago. We drove into the mountains north of Ranteapo up to a kampung called Deri. We passed quite a few buffalo being walked along the road, up this way it seems that most houses are raising at least one big bull. They’re such broad, round animals with long sweeping horns and lazy eyes. The road got increasingly bad as we got further up the mountain, every now and then the trees would give way to broad sweeping views across the terraced hillsides filled with rice fields and small clusters of Tongkanon houses peeking up through the bamboo forest. The air was nice and cool and we’d stop every now and then to take pictures and marvel at how green everything was. The rice is grown all year round so the fields are a patchwork of different shades of green as the rice matures. Lots of the fields were filled with people harvesting the rice by hand, carrying huge bundles on their heads and stacking it up ready to be taken away and threshed. All through the hillsides there are rockfaces and boulders with carved doors, where the deceased have been placed inside. Finally we reached Loko Mata, a larger rock face burial site at the top of the mountain. These graves are much simpler than the ornate ones we’d seen yesterday, just square doors embedded into the rock face, sometimes with photographs of the dead, spiral patterns carved into them or buffalo heads carved into the rock below. There were quite a few newly excavated kubor that had yet to be filled, they were quite large inside maybe 4 cubic metres, enough to put an entire family inside. As usual there were little piles of offerings including handbags and t-shirts as well as the more standard cigarettes and soft drinks. At one point we stopped for coffee and took some photos of the highly regarded spotted buffalo. He was having his neck exercised and looked very pleased when he was allowed to lumber back into his wallow. The albino sections look kind of sensitive to the sun and he was much happier in the cool brown water. The road was full of pot holes and blind corners, I was kind of happier when it was rougher because Andi had to slow down a bit to navigate his way through. I think I’m the only person in Sulawesi who habitually wears a seat belt. On the way down the mountain we stopped at a village where they were building a new Tongkanon house. It was great to see them climbing the bamboo scaffolding with big slabs of wood, hammering in wooden pegs without nails and everyone was barefoot. We drove back into town for lunch, we ate Ikan Goreng and a bunch of different greens, probably the best meal we’ve had so far, four people with drinks and extra rice came to a mighty $22 AUD. Now we’re back at the hotel writing up our little excursion drinking coffee, dad is doing it old school in hardcopy and here I am banging away on my usual word doc.

We went up to the mosque and prayed Maghrib and Ishaa pretty close together, dad loves the novelty of hearing the azaan from our accommodation. I’m happy to go along with dad, it’s always a peaceful feeling to line up again. We get a lot of greetings in the mosque, we’re new faces and a bit of a novelty out here. The same kids found us again with cries of ‘Nabi Ibrahim, Nabi Ibrahim’. We went back to the same restaurant and ate dinner, at least I did, dad gets a little precious on the old stomach and now we’re back at the homestay.