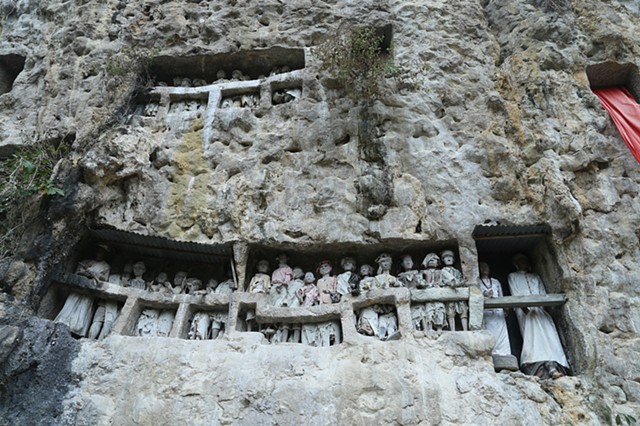 Last night was a bit of a wretched sleep, dad was snoring like an angry buffalo, he would fall silent and I’d wait until he’d built up a good head of steam and burst like ol’ faithful. We had the usual breakfast and Halmia and Andi came and picked us up by 10.30. We headed up to Suyra to check out some more cliff graves. These ones had quite a few Tau Tau figures locked into the rock face, they were much simpler and older than the ones we’d seen earlier. We climbed up a steep set of stairs cut inot the rock to the top of the cliff and checked out the view across the Toraja landscape. There were a group of very old boat coffins inside a glass walled building, the door was open and we could see skulls and bones spilling out of the rotting coffins. It began to rain heavily and we headed off to see some baby graves. In Toraja they enclose the bodies of babies who die before they grow teeth in the trunk of a rubber tree. There were little thatched doors all over a single great tree, it was a creepy place. We drove onwards through the back roads which were deeply pitted and crumbling in places, at one point we had to turn back because an excavator was stuck on an incline and there was no way past. Andi’s driving is a little hectic for me, we tailgated everyone in the rain and he accelerated whenever he got the chance, careening through winding village streets with people, dogs and chickens all over the place. Halmia explained that she had been rejected three times for a tourist visa to visit Australia, even for her cousin Aisha’s wedding. It doesn’t make any sense to reject her, she’s a very respectable school teacher but the Australian government is full of embarrassing bigotry. We dropped in to a little museum built into the side of a Tongkonan house. Outside was a mean looking pitbull on a chain and two big water buffalo, they keep their animals close out here. It was a dilapidated interior with cobwebbed displays of old spears and Toraja head dresses. One wall was devoted to family members who had died in the communist purges of 1965. We met the smiling old man who owned the house and chatted to another guy in perfect English, he’d done his masters at Melbourne Uni and was keen to say hello. We headed up to Makale and visited the Masjid Raya for Zohor and Asa’ar prayers before heading to their house for lunch. Halmia and Andi live in a dormitory next to the school that Halmia teaches at, it was a tiny little place filled with their two little boys aged 18 months and 3 years. We had a great lunch and headed back to Rantepao. On the way we visited a weavers shop and checked out the traditional weavers at work. They labour over a single piece for three months, taking it from raw cotton, spinning, dying and weaving. I picked up a couple of things for Anna and they dropped us off at the homestay. The power has just gone out so I guess it’s going to be an early night for us now that it’s getting dark.

We went out and grabbed some dinner at our usual restaurant, by the time we got home the lights were back on so I did some reading, drawing and looking up stuff while I had wifi.