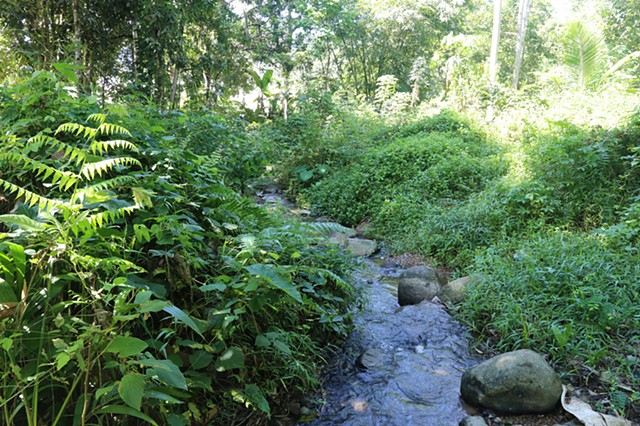 This morning I woke up with a rock in my stomach. Whatever I ate last night had given me a good case of the rot guts. I spent the morning alternating between the toilet and the sink, throwing up and throwing down. Andi and Halmia were going to come and pick us up at 11am and I was quite relieved when I got a message that they’d be delayed until almost 2. I read, slept, shat and spewed my way through the morning until about 1pm when I managed to drink a green melon juice and keep it down. I wasn’t looking forward to the 50km of winding mountain road to Palopo, by the time I got into the car I was much better than I had been but still enough on the guts to feel those corners. Usually I’m chatting away but this time I was dead quiet. The drive itself was spectacular, we wound our way up into a tropical Alpine environment with overgrown Pine forests falling away fro the road in very steep inclines. Each elbow we crossed a mountain stream coursing down the into the valley below. There were patches of houses built on stilts with little shops facing the road and sheer drops behind. I’m sure that a few kids must drop off the edges sometimes, there are no rails on anything. Every time a small truck or bus passed the other way we had to pull off the road so they could fit. We arrived in Palopo around 4pm and they dropped us off at the hotel. Halmia, her sister and two kids are staying at their cousins house tonight while Andi drives back to Toraja, he’s involved in politics and needs to sign up his candidate in the morning. Its was a shame that I was so crook, the kids are so cute but I was no fun at all. They’re proper little Indonesian mixes - Torajan, Bugis and Sundanese from Java, they’re going to end up speaking 5 languages including Indonesian and English. The Platinum Hotel is probably the best in Palopo, it looks only a few years old at the most but it suffers from the usual tiredness that so many Indonesian buildings seem to. We went out and had a soup down the road, at least it’s boiled as I was in no mood to risk my guts any more than I had to.