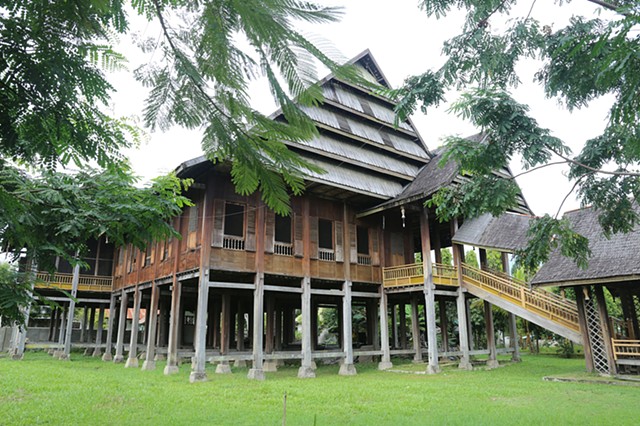 I’m feeling much better this morning, I think I got reasonably lucky with the guts. Breakfast was a little ordinary but at least it’s food we don’t have to find. Last night was a pretty fitful sleep, the hotel room has no windows and I kept waking up sweating and claustrophobic. Halmia and her brother Hasan came to the hotel and 9am and we walked over the road to the Luwu Palace to have a look around and meet the king. We met the kings daughter and waited for a bit until the king was free, everybody was chatting away in Indonesian so I just looked around at the photos. The king came out wearing his sarong and a t-shirt, it was all very casual and everyone chatted again in Indonesian. It was great to actually meet the king of Luwu although I didn’t really get to communicate anything due to the language barrier. The palace itself is an old Dutch colonial building, not particularly grand in the royal sense and it now functioned as a bit of a museum. We went in to have a look and I saw the royal family tree handwritten up on the wall. I was stoked to find my ancestors names up there, Opu Daeng Parani and his four bothers, the original five Bugis brothers who left Sulawesi for Malaysia around 300 years ago. This was the first time that I’d had that link to Luwu kingdom confirmed and I’m really happy that I was on the right track in coming up to Palopo. This is the Bugis homeland for all of our ancestors in Malaysia, it was interesting to see that family line stops with Daeng Parani in Luwu and starts again in Malaysia. Halmia was very excited to see that I’d found the link and impressed with the royal ancestry. We were allowed to have a look at the old wooden palace next door because we were now a part of the family in some way. I took photos of the old insignia from Luwu kingdom, this will definitely make an appearance in my work. Everybody is so friendly up here, we often get stopped and people want to have their photos taken with dad and I. When he came in 1968 people called him James Dean, in 2015 they stop and call him Yusuf Islam. We jumped into a couple of rickshaws, there was no way we were fitting into one little seat and headed off to book our bus tickets for Makassar on Thursday. After that we wandered up to the main mosque, Masjid Agung Luwu – Palopo for Asar prayers. Again we shook hands with at least 25 people and lots of photos were taken, people are very curious about where we come from and are amazed that there are Muslims in Australia and more amazed that I have ancestry in Luwu. We stopped at the Masdjid Djami’ Toea Palopo just next door to the hotel and had a look around. It was built in 1605, it’s the oldest mosque in Sulawesi and stands in contrast to all the other buildings around. It’s a stone building with walls over a metre thick, classic Javanese style architecture that's a bit of an anomoly out here, it sits about 30 degrees off Kibla and everyone prays on a bit of an angle to the Mihrab. Outside we met a group of old men, it turns out that one of them is related to Daeng Parani and now considers himself my Chuchu. Once they knew that I had family from this area I was declared Orang Palopo.

Up until this point I’ve been really unsure about how I’d gone, wether I was asking the right questions and putting myself into the right situations. I felt like a tourist in Toraja but here in Palopo I found something different. It’s seems like such a small step but I know that I couldn’t have found that link between the 5 brothers and where they came from unless I stood in the Luwu palace and read their names for myself. In many ways it’s just a small town tucked away in a dusty corner of Indonesia but finding that link opens up another history that goes back 800 years. The muddy mangrove flats filled with plastic bottles and decaying wooden boats, the open drains and grubby little rumah makan shops belie something older. The old Luwu kingdom still exists in it’s own way, this is the oldest part of the Bugis kingdoms and I feel like I can claim a tiny touch of what it was. I’m amazed that the old men in the mosque know who Daeng Parani was, he died 311 years ago in another country but they knew that he’d left with his family to seek his fortune. Being hugged in the mosque as a distant relative was something special.