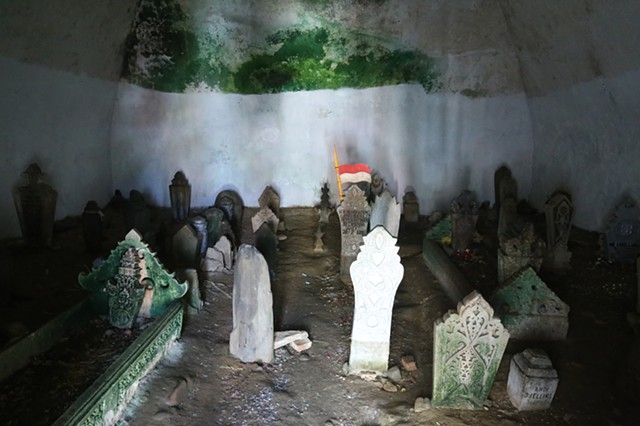 This morning I woke up completely recovered from my bout of the poops to find that dad has come down with a bit of faucet drawers. Breakfast was a bit better, slightly more options and some real dodol for the first time. Halmia and Andi came by around 9.15 and we drove out to visit the graves of the Luwu kings. The graveyard was filled haphazardly with tiled headstones of varying sizes, so many of which were children. The royal graves were much older, made from carved stone and locked inside a large white concrete pyramid structure. As a relative of Luwu I was allowed inside and I took a few photos and said Fatiha. We drove out through Palopo into the outskirts, there were tarpaulins all over the roadsides with cloves laid out to dry in the sun. The cloves are picked wild and everyone gets as much as they an before the season is over. The air out there is filled with the smell of cloves and little old ladies were raking their fingers through them, turning them over as they dried. We stopped and walked up a footpath alongside a mountain stream until we got to a waterfall. There were a few teenagers splashing around fully clothed, taking advantage of the relative privacy and we stopped to take some pictures of the scenery. Halmias three year old stripped off for a swim and I had to cool my face, I was sweating buckets in the humidity. Afterwards we drove back into town and stopped at Andi’s uncles house for coffee. We hung out while everybody chattered away in a few different languages, Torajanese, Sundanese, Indonesian and occasionally English. We headed around the corner to pray at the closest masjid and came back for lunch. These home cooked meals are the best we’ve had in Sulawesi, the fish were really fat and baked to perfection. We ate these little dried fish that are split down the middle and spread flat so that they look like squashy little monster faces. We sat around for a while watching the world go by, this was really slowing down to Indonesian style living. A couple of people dropped by out of curiosity to chat and ask if we were Pakistani, Turkish or Arab, nobody suspects us as Australian but everyone has seen it on TV. After a while we jumped back into the car and headed out to the wharf to look at the fishing boast and take some more pictures. Looking back at the town, it’s quite dramatic to see the mountains hit the ocean with a small strip of very fertile land at the base. Luwu stretches around the Gulf of Bone, clinging to the coastal plains in a large arc. This part of Sulawesi is now far away from the main centre of Makassar, it’s the old spiritual heartland and the basis of the pre-Islamic creation stories of the La Galigo cycle. It’s very interesting to read how closely associated they were to Toraja up until the twentieth century when the Dutch colonial agenda christianised the highlands, effectively separating them and pitting them against each other. We drove around to the beach, I was a bit skeptical but there is actually a bit of muddy brown beach carved out of the mangrove swamp. We drove through a series of fish and seaweed farms to get there, passing these colourful, windowless warehouses that serve as nightclubs and bars at night. I was surprised to see evidence of this kind of nightlife in a small Muslim town but I suppose there are plenty of young people and army people out here. Lombosa beach had seen better days, there was a bit of a promenade, some paddle boats and tired looking cafeterias. Out to sea just in front we could see fishing platforms to the horizon. On the way back to the hotel we stopped to get a couple of bunches of bananas from the markets, I braved the smell of durian and grabbed them for dad. Back at the hotel dad has sacked out straight away and I’m going to catch up on some emails.

Two hours of nap time later and I re-emerge, island time has really got the netter of me. We ate bananas and bread for dinner, it’s probably a good thing that my eyes don’t get too big for food here although there aren’t exactly many options in Palopo around the hotel. This place has been special for me in strange ways and I wonder if I’ll be back, I like to think so but it’s a long way to come for a very ephemeral link to the past. I’m really glad I came and it’s a strange sensation knowing that they remember Daeng Parani and I’m sure that I’m the first of his descendants to actually return to Luwu. The family trees are huge and it’s a tenuous link but I’m really glad that it exists, I feel like I have a strange sense of access to this humid island that’s so full of life. I can imagine dragging a canoe up into the mangrove swamps from the river and unloading fish into baskets, sweating under the same sun as so many people have before me, although it's just as likely to have been opium, slaves and palm wine. Sitting around swapping stories of things and places from distant shores, unloading cargoes and planning my way onto the next Perahu to leave. Luwu.